The other really useful knowledge: revalorising critique in the university

The other really useful knowledge: revalorising critique in the university
by Sarah Amsler

After UK universities were subsumed into the newly formed Department of Business, Industry and Skills in June of last year, it seemed that few changes in academic life could be any further surprising. Until the Times Higher Education featured a hot-pink guide on ‘20 steps to increase your ranking – ways to rise in the league tables without breaking the bank’. Neither the wisdom of the rankings nor the belt-tightening rhetoric was out of the ordinary: performance indicators, league tables and the spectre of radical budget cuts have become the grit of academic life. The banks, of course, have already been broken. But the framing of this consequential and contested political agenda as a playful popularity contest again pushed the boundaries of belief.

The guidance seemed simple, almost commonsense: hire good researchers, give them autonomy and power, and keep them happy. They bring prestige, money and networks. And if they can be transformed into managers, they can shape institutional culture and extract high levels of productivity from others.

But there was a more troubling message is in this guidance, in Tip No. 6: ‘no pain, no gain’. You must cut losses and losers to win. While elite researchers, institutional managers and ambitious young scholars are poised to accept this agenda as common sense, it is argued, ‘it is unlikely that everyone else will’. The reason? ‘We all tend to prefer the status quo.’ Within this logic, alternative positions are impossible. You can play hard and win or lose fairly, or you can win at all costs and take out whoever is standing in the way. But you cannot stop to question the rules of the game and still be included, or seriously suggest that we might all play another.

The problem is that this is not an idiosyncratic narrative. It is part of the wider and increasingly hegemonic discourse that diminishes democratic processes, marginalises opposition to the transformation of universities into fully integrated economic and political enterprises, and legitimises the withdrawal of public funds from higher education. It goes to the top. After releasing a controversial blueprint for education reforms in late 2009 and threatening what now appear confirmed as radical incisions into many university budgets, Peter Mandelson has caricatured critics as ‘people who don’t like change’, who ‘don’t want reform’ and who embody a ‘desire to maintain the status quo’.

You can be either in or out now; either for a prefigured, market-oriented vision of ‘progress’, or charged with advocating anti-values of stagnation and mediocrity. To criticise present trends in higher education policy – the institutionalisation of political-economic ‘impact agendas’ for research, the rapprochement of industry and academe, the hypocrisy of ‘raising student expectations’ while simultaneous slashing their financial support, not to mention other problems of campus surveillance and academic freedom – means to take up a position of either mediocrity or ridicule that exists beyond legitimate recognition.

Speaking when you anticipate criticism is possible, if hard. But speaking into a conversation where your positions are already discredited is absurd. This is why the pre-empting of critique and diminishing of public debate are such effective forms of disciplinary power within UK universities today. Here, academics are increasingly beholden to external validation, as skills of self-valorization give way to endless rankings by public opinion surveys and performance indicators. The prohibitions on critique are also strategically disorienting, for many academics have been tooled to expect – however so naively – that it can be recognised as a value within the university itself.

But this power throws sticks and stones as well as names. It is political; anchored outside the discursive realm in the new performative regimes of legitimacy and economic regimes of value now being embedded across the sector. Fixed prerequisites of professional participation are being defined, imposed and monitored for compliance (or in the softer language of power, for performances of ‘cooperation’ and ‘commitment’). But the particular politics of these terms remain unsaid, and can thus be performed as democratic and in the interests of the imagined common good. For what self-respecting scholar could possibly oppose change, progress, flexibility or public and social engagement? The problem is framed as the solution to the ‘other’ problems created by an (imagined) autonomous and democratic educational system. It might be called Orwellian, if the concept was much less oldthink.

From any alternatively reasonable perspective, the question is not about whether one supports a generic process of social ‘change’, but rather how the articulation of alternatives becomes framed as a generalised objection to progress itself, and as a danger to the general will. The problem is the suppression of political spaces in which this framing might itself be contested. Despite the proliferation of localised conversations and committees, genuinely public spaces for dialogue, critique and opposition are negated by pre-emptive threats of misrecognition and marginalisation. And on a more material level, critique is quietened by internalised fears that in the competitive ‘race’ for rankings and institutional survival, with jobs and reputations on the line, now is ‘not the time’ for asking such questions.

Fortunately, this logic exposes its own ironic contradictions. By legitimising technologies of control that foreclose debate, plurality and democratic process from the bottom up, the fear of the alternatives is revealed, and the stakes of the game made clear. By working so visibly to justify the restoration of elite education and research, to integrate these fully into business and industrial productivity, and to minimise or eliminate opposition to the agenda, the programme is exposed as the political struggle it is rather than the meritocratic movement it claims to be. It is known that the ‘reforms’ now being imposed on universities are divisive, disreputable and unjust. For if the proposals are so obviously progressive, why would they be impeded by public debate? And if this re-visioning of the university is so widely compelling, why is there so urgent a need to reshape academics’ perceptions and behaviour? What and whose is this pain that must be suffered in order for whom to gain what? And although it is assumed to be self-evident, it must be asked – why?

This is a time for questioning and for critique. However, provided that people can muster the will to speak into the absurdity of a discourse of foreclosure, concern and resistance must develop into acts of reclamation. We need to reclaim the commons within the university, to establish it where it has never been, to clarify in which intellectual and professional values we should defend and which should be transformed, to articulate and build alternative relationships between universities and other social institutions, and subject all of this to ongoing public and professional scrutiny. These things must be asserted collectively, despite whatever sort of name-calling and marginalisation might ensue. It is probably not a task well-suited to anyone whose self-respect, professional identity or intellectual relevance imbricate with the ratings game, and it is not the sort of programme that can be summarised, as recommended in ‘Raise your game’, in a ‘simple list of key priorities’. But that’s okay. It could be really useful knowledge.

BIS (2009) ‘New Department for Business, Innovation & Skills to lead fight against recession and build now for future prosperity’, online at: http://www.bis.gov.uk/bis-announcement. The department was created by combining the departments of Universities, Innovation and Skills, and Business, Enterprise and Regulatory Reform.

BIS, Higher Ambitions: The Future of Universities in a Knowledge Economy, online at: http://www.bis.gov.uk/policies/higher-ambitions.

As a long-time staff member at University of California, Berkeley, I have learned to dread any kind of change that comes with an administrative chiding that staff are "resistant to change" as if we were cattle balking at going into a new pen or upset about changing our milking routine. The university kindly provides us with a guide to accepting the inevitable, http://office.chancellor.berkeley.edu/csa/docs/The30MinuteChangePrimer.pdf, so we can teach ourselves to love that new pen.

But in my experience, when there are justified changes, such as when our admissions system went almost entirely online, nobody gave us any line about needing to accept change. When a change is dictated by circumstances that we all agree need accommodation, departments work together to make adjustments and remove the bugs in the new system. No smoke and mirrors and agonizing over change, just practical and creative adjustments to real problems.

Now the administration's latest theory is "shared services" and we must rush to reorganize our academic departments without waiting to see how this model has worked at other universities. We have hired an outside company (BAIN) that is charging us 3 million dollars to tell us how to reorganize ourselves. I have seen the suggestions that were made to University of North Carolina by this same company and every recommendation category notes that it is likely that people will be resistant to the proposed changes. With good cause, I suspect! But we must remember, Change is Good. 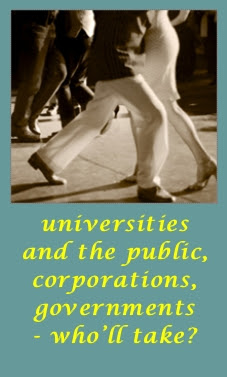